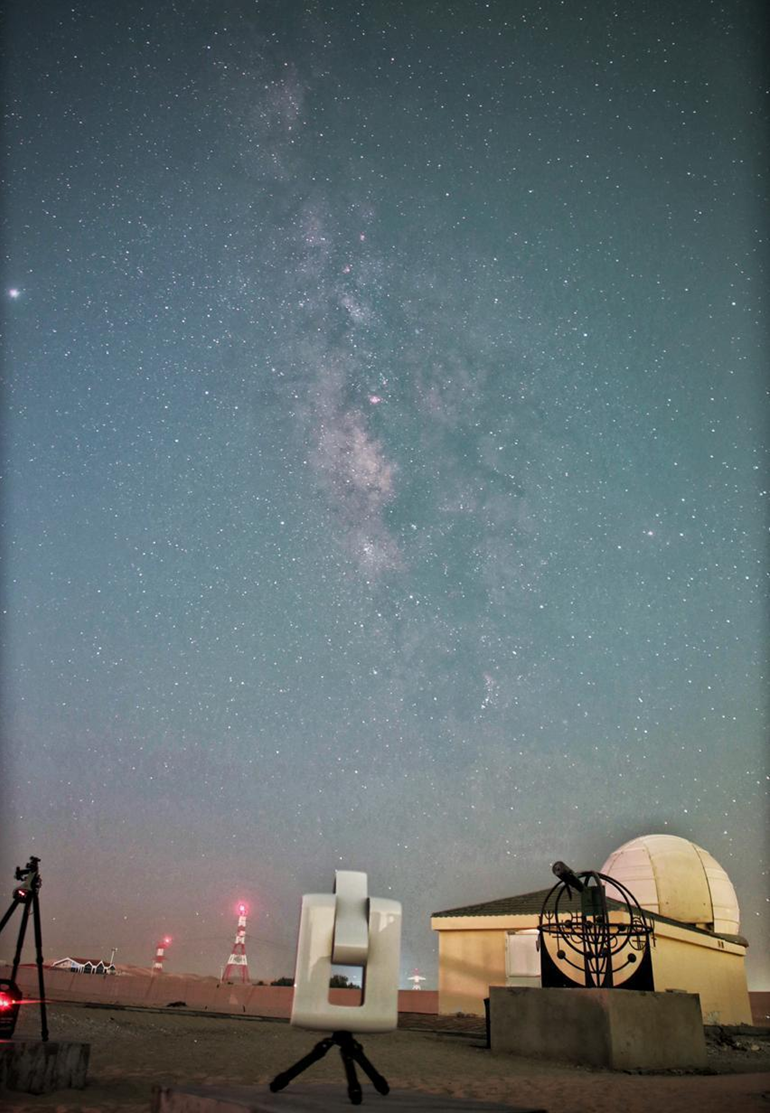 Abu-Dhabi based Al Sadeem Observatory is bringing to the Middle East a state-of-the-art technology in sky observation, which promises a unique and easier star-searching experience to astronomy enthusiasts, and to those who just want to dive right into the night sky.

After signing an exclusive agreement with the French electronic company Vaonis, Al Sadeem is now the sole Middle East distributor of Stellina, a smartphone-controlled telescope that lets you explore and capture the Universe right at the comfort of your homes.

Staying true to its Italian name that means “little star,” Stellina is a robotic, compact telescope with a completely disruptive design, just the size of a backpack and is built around an 80mm aperture lens. Stellina stands out from the rest of its traditional kin in the optics arena because it is app-based: a few taps on one’s smartphone or tablet will enable users to precisely locate a star or other celestial bodies in only a matter of seconds. No advanced astronomical experience needed, just basic knowledge on smartphone usage!

The sleek user interface of the Stellinaapp allows its users to enjoy the app without the hassle. No advanced astronomical experience needed, just basic knowledge on smartphone usage!

Stellina boasts an automated starfield recognition, image live stacking, and with its 400mm focal length, it perfectly captures the sky at a 3096 x 2080 pixel resolution. In manual mode, the telescope can be used to search with RA/Dec (equatorial) coordinates, and Stellina clients can do a number of manual image processing (TIFF, FITS), and even choose their own composition and framing.

The smart telescope can be set up in urban areas since Stellina’s station integrates a light pollution filter, so there’s no need to drive miles away from home just to admire the night sky’s cosmic wonders. A little caveat, though: nothing beats a pure dark and clear night sky, so expect a little challenge observing some night sky objects in cities.

With the “new normal” brought to us by the coronavirus pandemic that now requires us to observe social distancing, Stellina maximizes the sharing experience to its users. The telescope allows as many as 10 persons to connect to it all at the same time, and the pictures taken using the Stellina can be posted straight on their social media platforms to share with friends and family!

Because Stellina is designed for travel (weighs only 11 kilograms or 24 pounds), the telescope can be powered by a 10,000 mAh battery pack that is connected via USB Type-C cable and can run for up to 5 hours.

Vaonis, which was founded in 2016, has also been supported by the European Space Agency in developing Stellina—the first in the series of groundbreaking optical equipment in the field of astronomical observation.

The sleek and ultra-compact design of Stellina has earned it the prestigious Digital Imaging Category Innovation Award at the Consumer Electronics Show (CES) in Las Vegas and was also showcased at the MoMA Design Store in New York for an exclusive pre-launch during NYCxDesign.

Al Sadeem Astronomy Observatory is the first private observatory built in the United Arab Emirates. Established in 2016, the observatory is located on a private farm in Al Wathba South, Abu Dhabi. Al Sadeem Astronomy has been holding lectures on space and astronomy, carrying out planetary observations, and deep-sky observations, as well as conducting space research done in collaboration with international institutes. The observatory is the brainchild of two passionate astronomy enthusiasts—an Emirati with a brimming interest in the night sky and a Filipino who started a small astronomy club in the Capital.

For more info on product specifications and price, please send an email to info@alsadeemastronomy.ae.

For more information on Stellina, kindly visit the official website of Vaonis: https://vaonis.com/stellina