The change of seasons ushered in days of gloomy weather; let’s hope this won’t drag on until April!

There’s a meteor shower (Lyrid meteor shower) to watch out for in the middle of the month, but because of the presence of the Moon at the night sky, spotting the Lyrids will be pretty tough for avid sky watchers and observers.

Planets such as Venus, Mars, Jupiter, and Saturn will be still be spotted near the Moon in the coming days, and many brilliant prominent winter constellations and deep-sky objects will be seen during early evening hours.

Sky treats such as the nebulae in Orion constellation (Great Orion, Flame, and Horsehead), and galaxies like the ones in and the Leo Triplet and Sunflower Galaxy still await amateur astronomers and astrophotographers.

Scroll down for a more detailed list of all the sky events that you’ll want to look forward to this April. The dates and times are based in UAE Local Time.

Beginning at 5 A.M., the Moon in Waning Crescent phase (9.8% illuminated) will appear 3.5°east-southeastern of Venus in the constellation Aquarius (The Water Bearer). Also seen nearby are planets Jupiter—the bright white “star” situated at the far northeast of the pair—and Saturn, which comes into view as a brilliant yellow-orange shining object situated slightly higher at the northeast of the pair.

Moon-Venus Conjunction on April 2, 2019 at around 5:30 AM (not to scale) (Graphic Courtesy of Stellarium)

This day will be the best time to observe deep-sky objects since the Moon will not be visible. It will be situated on the same side of the Earth as the Sun, specifically in the constellation of Cetus (The Sea Monster). The lunar phase is predicted to take place on this day. However, the month transition from Radjab to Shaban shall occur on the same date in accordance with the Hijri Calendar 1440.

It’s the Red Planet’s turn to be at a close distance to the Moon. At 7 P.M., the pair will be seen at the western horizon before setting at 9:45 P.M. The Moon in its Waxing Crescent phase will be at 5.3° west-northwest of planet Mars, in the constellation Taurus (The bull). 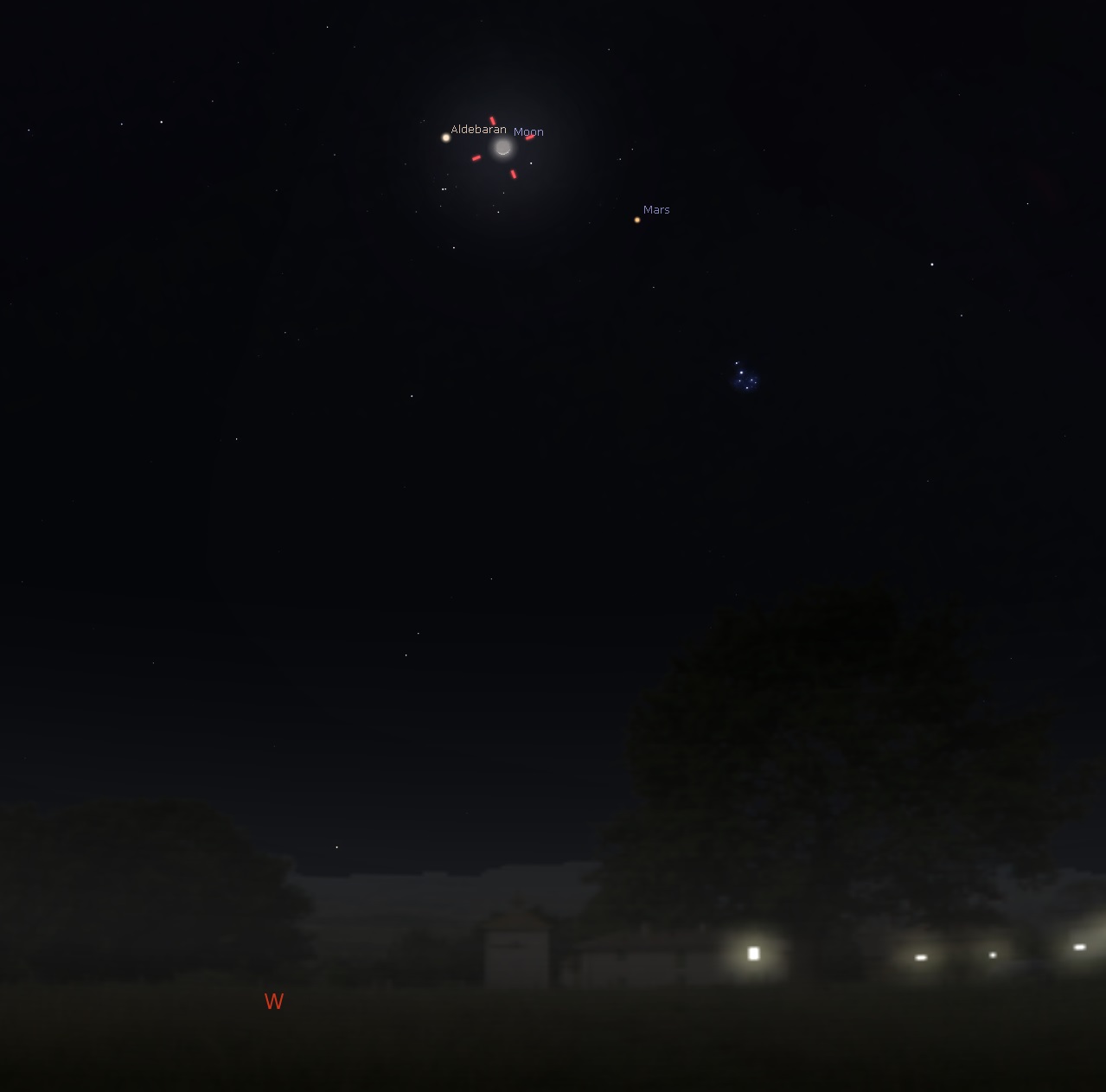 Moon-Mars Conjunction on April 9, 2019 at around 7:40 PM (not to scale) (Graphic Courtesy of Stellarium)

The smallest planet in the Solar System, Mercury, will appear at its highest point just a few moments before sunrise.  This means Mercury can be seen up to 11° above the eastern horizon at dawn, from 5 A.M. until it gets washed out into view by the Sun’s glare at 5:45 A.M. Though it is brighter, observing it will be quite of a challenge because of the planet’s nearness to the Sun in the sky.

Mercury at Greatest Western Elongation (about 11° above the eastern horizon) few minutes before sunrise on April 11, 2019 (not to scale) (Image Credit: Stellarium)

Situated on the opposite side of the Earth as the Sun, the Moon will be fully illuminated. For selenophiles, or those who love the Moon, this is the best time to observe all the surface features of this celestial object, including its craters and maria. At 7 P.M., expect the Moon to appear the eastern horizon as it rises, and can be seen throughout the night until sunrise positioned in the faint constellation of Virgo (The Virgin). Since the Moon’s illumination is at 100 percent, it will not be a good time for deep-sky observations.

On the late evening hours of April 22 until the dawn of April 23, the peak of an average meteor shower known as the Lyrids will take place. Around 10-20 meteors per hour are expected to be spotted with the naked eye under completely dark, cloudless skies. This April “shower” got its name after the constellation Lyra (The lyre), where it appears to radiate from. The space debris from comet Thatcher entering Earth are the ones responsible for this meteor shower. Unfortunately, the bright Waxing Gibbous Moon (about 92% illumination) will flood out much of the dark sky, reducing the chances of more meteors to be seen.

Radiant of Lyrids on April 23, 2019 at around 12 AM (Graphic Courtesy of Stellarium)

Watch out for the Moon-Jupiter pair at the southeastern horizon from 11 P.M. of April 23 until sunrise of April 24, specifically in the faint constellation of Ophiuchus (The Serpent Bearer).The Waning Gibbous Moon will be about 6° southwest of Jupiter, which will appear to be a bright white “star.”

Moon-Jupiter Conjunction on April 24, 2019 at around 1:30 AM (not to scale) (Graphic Courtesy of Stellarium)

From one in the morning until sunrise, the Moon and the ringed planet Saturn will appear close to each other at the east-southeastern part of the sky, with the Earth’s natural satellite in its Waning Crescent phase situated at 4.4° southwest of the ringed planet. Also seen nearby the pair are planets Venus and Jupiter. All celestial objects will be situated in the constellation Sagittarius (The Archer).

Moon-Saturn Conjunction on April 26, 2019 at around 2AM (not to scale) (Graphic Courtesy of Stellarium)