The United Arab Emirates (UAE) is set to witness another rare celestial event on December 26—the Annular Solar Eclipse of 2019.

An annular solar eclipse happens when the Moon covers the Sun’s center, but only enough to leave the Sun’s outer edges visible, creating a kind of “ring of fire” or annulus around the Earth’s natural satellite.

The eclipse will begin at 7 A.M. until 9 A.M. here in the UAE, with the annularity or “the ring,” to be seen at the southernmost parts of the UAE, such as in Liwa, Mezaira, and Hameem, as well as in the western areas, too, like Ruwais in Abu Dhabi. The rest of the emirates will only be able to see 60 percent of the eclipse.

If you plan on observing this phenomenon, don’t forget your filtered solar telescopes or solar eclipse glasses. See this link for more details.

An Annular Eclipse of the Sun on December 26, 2019 (with music) from LarryKoehn on Vimeo.

On December 11, the Observatory will be back for Hudayriat Island’s “Constellation Night,” where Abu Dhabi residents are offered the best experience in astronomy and stargazing for free!

This day will also be a little bit extra because of the Venus-Saturn conjunction that will grace the southwestern portion of the sky right just right after sunset.

Illustration of the Venus-SaturnConjunction at around 6 PM of December 11, 2019. (Graphic Courtesy of Stellarium)

Another cosmic treat will also dazzle participants and other curious sky watchers as the big Moon looms over as it goes into its full phase the following day, December 12.

As early as six in the evening, selenophiles—or those who love the Moon so much—can begin observing all the surface features of this celestial object, including the craters and maria. The Moon says goodbye to the sky on December 26, as it enters its New Moon phase.

On December 13 to 14, the night sky will showcase the peak one of the most popular meteor showers in the world—the Geminids.

Normally, an average of 120 multicolored meteors per hour is expected to pepper a completely dark, moonless, and cloudless sky. But this year, the Geminids may turn out to be a dud. Thanks to the bright Waning Gibbous Moon that will wash out the meteor shower display.

The meteor shower, which is actually space debris from asteroid 3200 Phaethon scratching the Earth’s atmosphere, derived its name from the constellation Gemini because it appears to radiate from The Twin. But it doesn’t mean it can’t be seen elsewhere in the sky. Geminids can be observed two hours before midnight this year until dawn.

The position of Geminids radiant.(Graphic Courtesy of Stellarium)

After the Geminids show, minor Ursid meteor shower will take over December skies on the evening of December 22-23. It’s a really minor shower, with an average of 5 to 10 meteors per hour under completely dark, moonless and cloudless skies. We’re crossing our fingers for the Ursids to have a better show this year since the Waning Crescent Moon will rise much later in the early morning hours and hence, less glare from the Earth’s satellite to drown the “shooting stars.”

Like the Geminids, these meteors are named after the constellation where they seem to radiate—the Ursa Minor, which is found at the sky’s northern portion. The meteors are from the space debris of Comet 8P/Tuttle.

The position of Ursids radiant. (Graphic Courtesy of Stellarium)

The winter solstice on December 22 will signal even longer nights and shorter days in the coming days.

A solstice happens when the Earth’s axis tilts at a certain maximum extent to the Sun. For this month, our planet’s axis tilt towards the Sun marks the beginning of winter in the Northern Hemisphere (where the UAE is) and summer in the Southern Hemisphere.

The winter solstice in the UAE is expected to occur at 8:19 A.M (UAE Time). 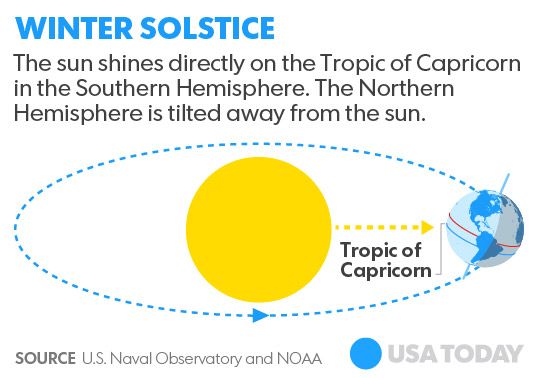 What else to see in the December sky

Illustration of the Moon – MarsConjunction on December 23, 2019at 5:30 A.M. (Courtesy of Stellarium)

Illustration of the Moon – Venus Conjunction at 6:30 P.M. (Courtesy of Stellarium)