JULY 2020 SKY EVENTS: A Display of Planets and a Meteor Shower

JULY 2020 SKY EVENTS: A Display of Planets and a Meteor Shower

July nights may be hotter and more humid now, but this shouldn’t spoil what the vast cosmos has in store for everyone.

Yes, days will be longer still—with the Sun rising between 5:37 AM and 5:50 AM and setting between 7:06 PM to as late as 7:15 PM, but the sixth month of the year is actually a good time to observe(with the help of telescopes) a number of deep-sky objects, such as star clusters, nebulae, and galaxies—namely the Lagoon Nebula, Trifid Nebula, Rho Ophiuchi molecular complex, and the Milky Way Galaxy.

The planets will be a treat, too. First in line is the hottest planet in the Solar System, Venus, which will show up at its brightest on July 8 at around 4 AM until sunrise, and will be cleverly situated within the Hyades star cluster in the Taurus constellation.

Venus at its brightest with the Hyades at around 4:45 AM (Image Credit: Stellarium)

Excited to know more? Scroll down to check the sky events for July!

Dive deep into the night sky with this wide-field photo of the #LagoonNebula (M8, NGC 6523) and the #TrifidNebula (M20, NGC 6514). Did you know that Trifid #nebula’s apparent size is almost the same as the full moon’s? You can even spot the pair with the naked eye (as long as the sky is clear and very, very dark)! 📸 @thabet_uae ✔️ 24x180secs for this image ✔️ RedCat and Canon Ra + Fornax Lighttrack ii #abudhabi #deepskyobjects #uaeastronomy #UAE #alsadeemobservatory #alsadeemastronomy #photooftheday #thenakedsingularity #universetoday #youresa #ferventastronomy #photography #space #cosmos #astronomy #research #alsadeemastronomyobservatory #stars #astro #deepskyphotography #instagood #picoftheday #horizon #nightsky #nightphotography

Roughly 5.5 hours of images made this time lapse of the #milkyway, featuring me doing nothing while the other rigs image! The best part was trying out the gorgeous @vaonis Stellina. Stay tuned to see the results 👀 #abudhabi #uae #astronomy #astrophotography #milkywaychasers #universetoday

Selenophiles, or those who love the Moon, will be thrilled to welcome July, as this month opens with a Full Moon on July 5. Situated on the opposite side of the Earth as the Sun, the moon will be fully illuminated (100%) on this day. Beginning at 7:45 PM, observers can begin to spot all the surface features of the Earth’s only natural satellite, including its colossal craters and maria. The Moon can be seen throughout the night until sunrise. Conversely, it won’t be a good time for deep-sky observation with the Moon drowning most of the faint celestial objects in its reflected light.

Come July 20, when the New Moon appears. On this day, the moon will not be visible as it will be situated on the same side of the Earth as the Sun. With no moonlight glaring much of the night sky, now this is the best period to snap some deep-sky photos throughout the night.

The lunar phase is predicted to happen on this day. However, the month transition from Dhū al-Qa‘dah to Dhu l-Hidjdja shall take place two days later (July 22) in accordance with the Hijri Calendar 1441.

On July 23, Mercury will be at its greatest western elongation. This means that the smallest planet in the Solar System will appear at its highest point just a few moments before sunrise. At 4:30 AM the peak altitude of Mercury in the UAE will be around 14° above the east-northeastern horizon. Mercury will do a quick peek in the sky until the sun rises at 5:40 AM. Though it is moderately bright, observing it will be quite difficult since Mercury is very near the Sun in the sky by this time.

Illustration of Mercury at Greatest Eastern Elongation on July 23, 2020, at around 5:30 AM (not to scale) (Graphic Courtesy of Stellarium)

Here’s more. Watch out for planets Jupiter and Saturn and the Waning Gibbous Moon at the southeastern horizon from 8:30 PM of July 5 until sunrise of July 6 to appear close to each other in the sky. Jupiter will appear as a bright white “star,” while Saturn is a yellowish dot in the sky; both are not twinkling, they will appear as bright tiny dots in the sky.

On July 11, the red planet Mars and the bright Waning Crescent Moon will appear close to each other in the sky in the early morning hours of this day. The conjunction will be seen on the eastern horizon from around 12 AM until sunrise. Mars would look like a fairly bright red-orange “star.”

The Waning Crescent Moon and planet Venus will also appear in appulse on July 17; would appear relatively close to each other when viewed from Earth. It is expected to be observed in the eastern section of the sky at around 3 AM until sunrise at around 5:45 AM.

Watch for the gas giant Jupiter on July 14 as it will be at its brightest this month. Why? It’s because the giant planet will be situated directly opposite of the Sun in the sky, which would give it further illumination—this is what experts call an “opposition.”What’s more, its distinct belts and zones feature, along with the planet’s four Galilean moons, can also be observed using high-powered telescopes. Jupiter will be visible right after sunset at around 7:35 PM until it sets at sunrise around 5:30 AM.

On July 21, it’s the ringed planet Saturn’s turn to appear at its brightest (opposition) as seen from the sky since Saturn will be situated directly opposite of the Sun. Saturn can be seen as early as 7:35 PMuntil sunrise around 5:30 AM.

Of course, July won’t pass by without a bang. On late evening hours of July 29 until sunrise of July 30, the Southern Delta Aquariid Meteor Shower will spice up the night sky with an average of 20 meteors per hour at its peak. These meteors will appear to radiate from the constellation Aquarius but can be witnessed anywhere in the sky. The space debris from the comets Marsden and Kracht entering Earth are the ones responsible for this meteor shower. A must-have in observing this astronomical phenomenon is patience—and lots of them. 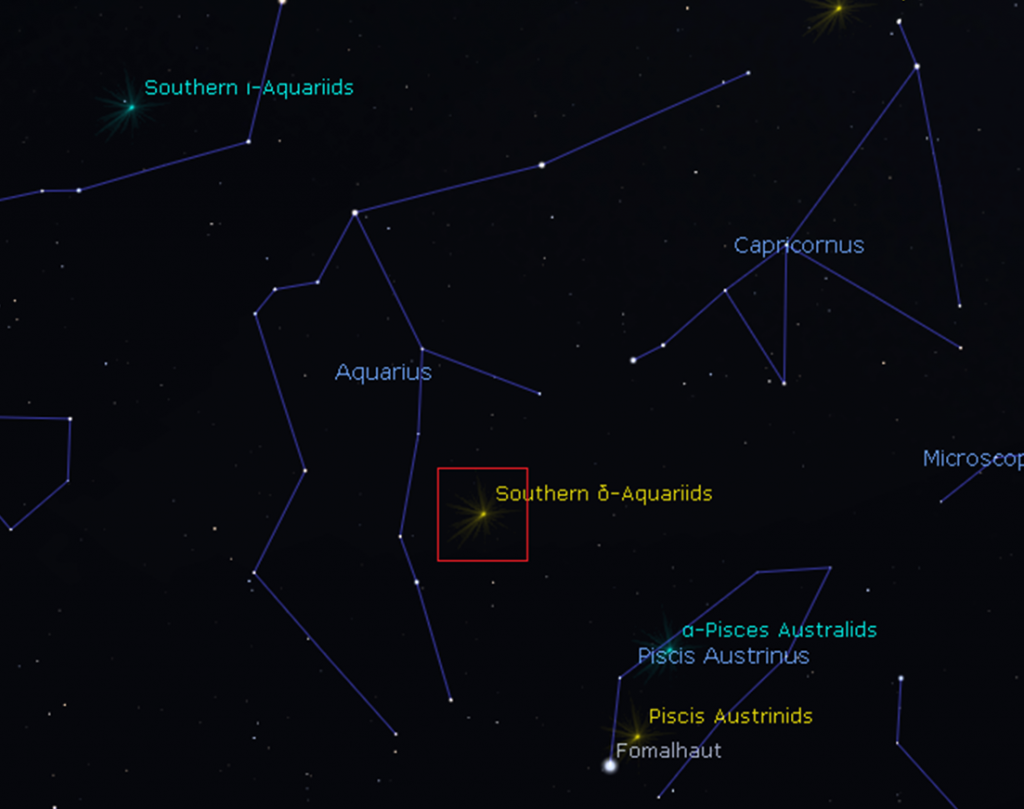