May 2020 Sky Events: Watch a meteor shower, hunt your favorite galaxy or nebula, and more!

May 2020 Sky Events: Watch a meteor shower, hunt your favorite galaxy or nebula, and more!

Hotter days have already descended here in the desert as Ramadan 2020 begins, which also means having longer days and shorter nights.

For one, the sunrise now happens between 5:33 AM and 5:47 AM, while the sunsets between 6:52 PM and as late as 7:06 PM. That’s pretty long, right? But don’t let this dampen your spirits in experiencing the night sky’s jaw-dropping treats.

Star parties, open houses, and public viewings are still not possible, but while everyone’s at home practicing social distancing—and we hope that observing the sky is possible in your area—here’s a quick rundown of all things Astro that you would not want to miss this May.

HUNT THOSE GALAXIES AND NEBULAE

To astronomy enthusiasts and professionals, get your astrophotography equipment ready this month as various galaxies and nebulas will be well-placed in the night sky. The galaxies and star clusters in the Spring constellations Leo, Virgo, and Ursa Major are still the nightly regulars for those who would want to capture their splendor. To name a few they are the Leo Triplet, the Whirlpool Galaxy, the Bode and Cigar Galaxy, and the Virgo Galaxy cluster.

Later towards the early morning hours, several deep-sky objects of the summer season will rise up at the southern portion sky such as the Lagoon, Trifid, and Eagle Nebulae, as well as the glorious Milky Way galaxy.

But you know the drill, folks. Not all days are blessed with a really, really, dark and clear sky.

Just like on May 7—a Full Moon. The Earth’s satellite will be a hundred percent illuminated on this day beginning at 7 PM somewhere on the eastern horizon, so it’s best to admire its craters and maria this time.

Wait until the Moon begins to wane until it reaches its New Moon phase on May 22. With no moonlight glaring much of the night sky, this is the best time to observe the deep-sky objects throughout the night. It is predicted that the lunar phase will occur on this day.

On the early morning hours of May 6, an average meteor shower known as the Eta Aquariids will peak.

With an average of 15-20 meteors per hour under completely dark, cloudless skies, the Eta Aquariid meteor shower will appear to radiate from the constellation Aquarius (The Water Bearer), which is somewhere in the sky’s east-southeastern portion. Catch it from 3 AM all the way through dawn.

Eta Aquariids are borne from the trail of space debris of comet 1P/Halley.

But here’s a caveat: the meteor shower’s peak falls on the night when a bright near-full Moon will drown the sky, reducing the chance of seeing many meteors. If you’re patient though, you might see one or two streaks in the night sky. Even more, inshallah.

Radiant of Eta Aquarids on May 6, 2020, at around 4 AM (Graphic Courtesy of Stellarium)

A triple treat will occur on May 13, when the Waning Gibbous Moon, Jupiter, and Saturn will come close to each other to form what we call an “appulse.”They will be seen at the east-southeastern horizon beginning midnight, at 12:30 AM until the trio fades into view at sunrise. 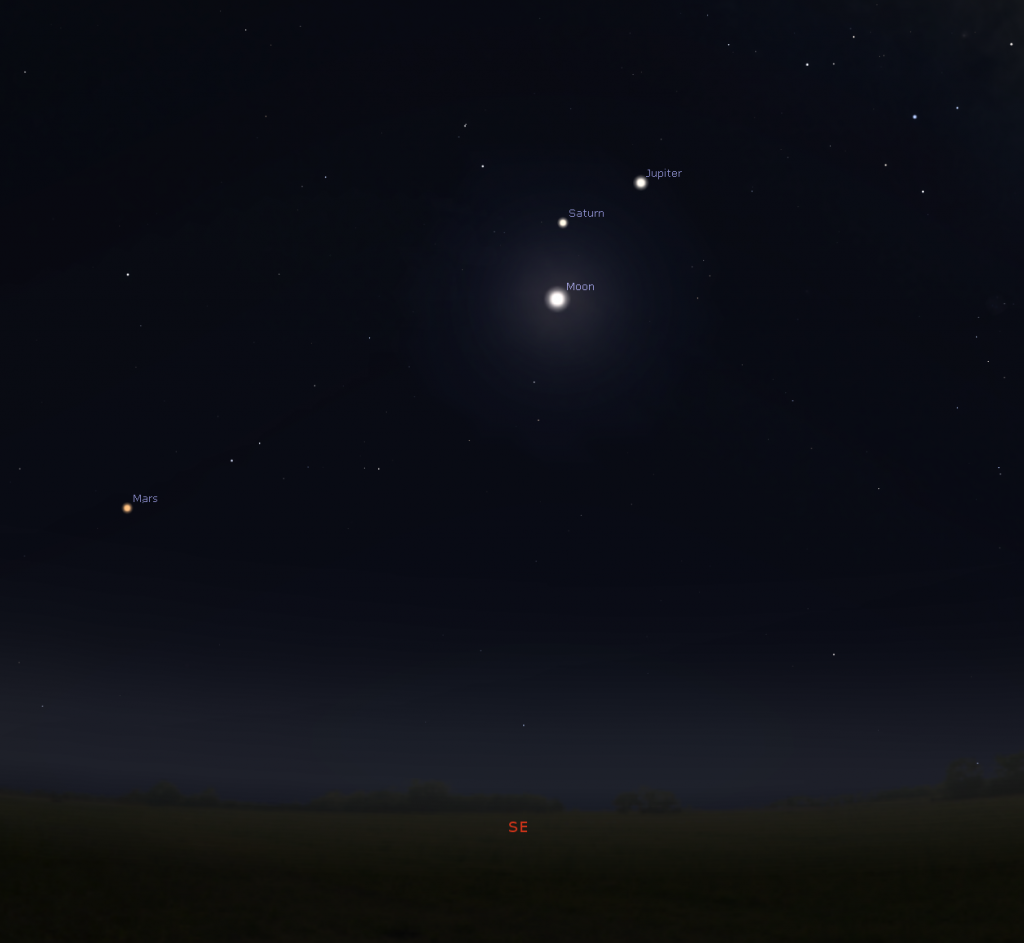 Meanwhile, happening on May 15 is the Moon-Mars conjunction, when the red planet Mars and the bright Waning Crescent Moon skirts near each other.

Catch them in the early morning hours, from 2 AM until sunrise, approximately at the east-southeastern part of the sky. Planet Mars, appearing as a fairly bright reddish “star,” will be placed to the west-northwest of the Moon.

The giant gas planet Saturn will also say marhaba (Hello in Arabic) to avid skywatchers on this day, too, and will appear as a yellow-orange “star” northeast of the pair.

Sunrise and sunset times in Abu Dhabi, May 2020. (n.d.). Retrieved from timeanddate.com: https://www.timeanddate.com/sun/united-arab-emirates/abu-dhabi?month=5&year=2020