Assalam alaikum, everyone! The last couple of months have been pretty uneventful astronomy-wise, but that drought is about to end as the month of June ushers in a fiery calendar of a busy night sky, beginning with—not just one but two—eclipses, a solstice, and more galaxies and planets to hunt!

So don’t worry if the nights are now shorter, with sunrises occurring between 5:33 AM and 5:37 AM, and sunsets at 7:07 PM until 7:15 PM—and days hotter. This month is sure to be bustling with a number of sky treats to see.

The planets will pop out in the sky earlier at night. Mercury can be seen in the west-northwestern portion of the sky after sunset; Jupiter, Saturn, Mars, and Neptune will be seen in the late evening hours (11 PM, 12 AM, 2 AM, and 3 AM, respectively). The only planets that won’t make an appearance would be Venus and Uranus.

And did we mention that the Milky Way will be very prominent in the night sky this June? A few nebulae, too, such as the Eagle Nebula, and a slew of galaxies, like the cluster in Virgo constellation. Just make sure your place is really dark (and observing the necessary precautions against the coronavirus) when you go out and spend your time into the night.

Check out the list below to learn more about the astronomical activities happening this month:

To those who love the Moon—selenophiles as we call them, this day will be a precious sight. It marks the full phase of the Moon, and it can be seen as early as 7 PM at the eastern horizon.

But wait, there’s more. On the same night, a penumbral lunar eclipse will happen. The Moon will slightly dim as the Earth’s outer shadow (penumbra) will cover about half of its natural satellite. The entire duration of the penumbral lunar eclipse will last for about 3 ¼ hours from 9:45 PM, June 5, until 1:05 AM, June 6. See this link for more details.

Sequence of Events for the Penumbral Lunar Eclipse on June 5-6, 2020 in Abu Dhabi (Source: timeanddate.com)

Comparison of Regular Full Moon and Penumbral Lunar Eclipse in which the slight dimming in the Moon’s illumination is evident (Image Credit: F. Espenak/EarthSky)

The Moon rests from human races’ view on this day. With no moonlight glaring much of the night sky, this is the best time to observe the deep sky objects throughout the night. It is predicted that the lunar phase will occur on this day. However, the month transition from Shawwal to Dhu l-Kada is expected to take place one day after (June 22) in accordance with the Hijri Calendar 1441.

The Sun will rise and set at the northernmost point in the sky, traveling a much longer path. Areas situated at or near the Tropic of Cancer (about 23.5° north latitude) will receive direct sunlight in which the Sun will be directly overhead at noontime. But while this is the case, note that it will NOT be the hottest day in the year due to season lag. On this day, sunrise will occur at 5:34 AM and set at 7:14 PM UAE local time, with the day length of 13 hours, 39 minutes and 15 seconds.

The Earth’s North Pole is tilted towards the Sun during the June solstice when the northern hemisphere receives more sunlight than the southern hemisphere. The most concentrated rays from the Sun will be shined directly to areas within the Tropic of Cancer (including the UAE) (Image Credit: TimeAndDate.com/Business Insider)

How the Sun moves on this year’s June solstice. The Sun rises north of east and sets north of west; traveled the longest distance across the sky (Graphics Credit: Stellarium)

And yes, we’re still on June 21st. (Such a jam-packed day for everything astronomy, eh?) But this is probably the highlight of the month, and the UAE is at the front seat once again for a  rare celestial event—the Partial Solar Eclipse of 2020.

The eclipse will be a three-hour event, beginning at 8:12 AM until 11:08 AM. An estimate of 87% of the Sun’s disk will be obstructed by the Moon as will be seen here in the UAE.

But other countries will be lucky enough to see an annular solar eclipse. This happens when the Moon covers the Sun’s center, but only enough to leave the Sun’s outer edges visible, creating a kind of “ring of fire” or annulus around the Earth’s natural satellite. The path of annularity will cross Yemen, southeastern-most portion of Saudi Arabia, central Oman, southern Pakistan, northern-most sections of India, Tibet Peninsula, southern China, and Taiwan.

If you plan on observing this phenomenon, don’t forget your filtered solar telescopes or solar eclipse glasses! See this link for more details.

Sequence of Events for the Partial Solar Eclipse on June 21, 2020 in Abu Dhabi (Source: timeanddate.com) 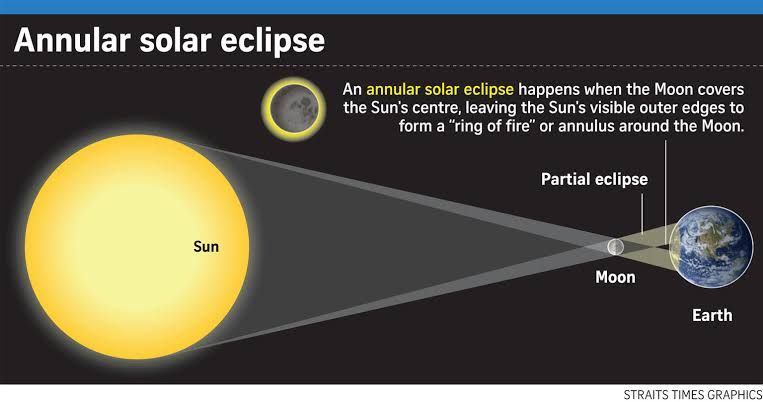 On June 4, Mercury, the smallest planet in the Solar System, will be at its greatest eastern elongation. It will appear at its highest point just a few moments after sunset. In the UAE, the peak altitude of Mercury will be around 18° above the western horizon at 7:30 PM until 8:40 PM. Though it is moderately bright, observing it will be quite difficult since Mercury is very near the Sun in the sky by this time.

Illustration of Mercury at Greatest Eastern Elongation on June 4, 2020, at around 7:30 PM (not to scale) (Graphic Courtesy of Stellarium)

Watch out for planets Jupiter and Saturn and the Waning Gibbous Moon at the southeastern horizon from 10:30 PM of June 8 until sunrise of June 9 to appear close to each other in the sky. Jupiter will appear as a bright white “star,” while Saturn is a yellowish dot in the sky.

On June 12, the red planet Mars and gas giant Neptune will be in conjunction, which will be visible in the early morning hours—from 1:30 AM until sunrise. A heads up for avid skywatchers: a large-aperture telescope and most likely long exposure photography are necessary to be able to see these planets clearly and individually (especially Neptune).

Mars-Neptune (marked) Conjunction on June 12, 2020, at around 2 AM (not to scale) (Graphic Courtesy of Stellarium)

On June 13, the red planet Mars and the bright Waning Crescent Moon will appear close to each other in the sky in the early morning hours of this day. The conjunction will be seen at the east-southeastern horizon from 2:30 AM until sunrise. Mars would look like a fairly bright red-orange “star.”

Finally, the largest planet Jupiter and dwarf planet Pluto will be in conjunction on June 25 and will be in fact already visible much later in the evening—from 10:00 PM of June 24 until sunrise of June 25. It is important to note that a large-aperture telescope and most likely long exposure photography are necessary to be able to see these planets clearly and individually (especially Pluto).

Jupiter-Pluto (marked) Conjunction on June 25, 2020 at around 3 AM (not to scale) (Graphic Courtesy of Stellarium)