WHAT TO EXPECT IN THE NIGHT SKY THIS SEPTEMBER 2020?

WHAT TO EXPECT IN THE NIGHT SKY THIS SEPTEMBER 2020?

We’re down to the last month of this year’s third quarter! September 2020 seems to be a tranquil time for all things astro—nothing fiery happening, probably except for the temperature… it’s still humid and hot amirite?

Yet cooler nights will soon now be upon us. As a fitting signal, an equinox is happening on September 22. On this day, the Earth’s axis is not tilted towards nor away from the Sun, which means that there will be an equal duration of day and night in all areas of the Earth—exactly 12 hours each!

The Sun will lie perpendicular to the Earth’s equator, and it will appear to rise and set exactly from due east and west, respectively. Meanwhile, in the equator, the Sun will be directly overhead at noon.

If the weather permits, September will be a good month to observe numerous deep-sky objects, like star clusters, nebulae, and galaxies through a telescope! You can try looking for the Dumbbell Nebula, Summer Triangle asterism, and of course, the Milky Way Galaxy in the early evening hours. Some autumn deep-sky objects like the famous Pleiades star cluster and our galactic neighbor Andromeda Galaxy can also be observed in the early morning hours.

As you may already know, Al Sadeem Observatory has been named as the exclusive distributor of the state-of-the-art smart telescope of Vaonis’ Stellina. Astrophotography has become so much easier for us with this app-based observation telescope. It can capture almost anything that’s in the Messier catalog, or the New General Catalogue of Nebulae and Clusters of Stars. The smart telescope can actually be set up in urban areas since Stellina’s station integrates a light pollution filter. But of course, nothing beats a pure dark and clear night sky, so expect a little challenge observing some night sky objects in cities with this powerful technology.

Aside from the deep-sky jewels, most of the Solar System planets (except Mercury) can be observed this September, too, such as the gas giants Jupiter, Saturn, and Neptune right after sunset. While planets Mars, Uranus, and Venus can be seen much later in the evening until the early morning hours. It is advisable to use high-powered telescopes (at least 8-inch and larger) to get decent, resolved views of the planets.

We’re pleased to announce that #AlSadeemObservatory is now the exclusive distributor of @vaonis’ groundbreaking #Stellina smart telescope here in the #MiddleEast! Stellina is a robotic, compact telescope with a completely disruptive design, just the size of a backpack and is built around an 80mm aperture lens. Stellina stands out from the rest of its traditional kin in the optics arena because it is app-based: a few taps on one’s smartphone or tablet will enable users to precisely locate a star or other celestial bodies in only a matter of seconds. No advanced astronomical experience needed, just basic knowledge on smartphone usage! Find out more about Stellina by clicking the link in our bio! #Vaonis #smarttelescope #abudhabi #uae #telescope #observation #space #cosmos #astrophotography

Situated on the opposite side of the Earth as the Sun, the moon will be fully illuminated (100%) on this day. For selenophiles (individuals who love the moon), this is the best time to observe all the surface features of this celestial object, including the craters and maria (dark patches). It will start appearing at around 6 PM as it rises from the east, and can be seen throughout the night until sunrise; positioned in the constellation of Aquarius (the water bearer). Because of its full illumination during this phase, it will not be a good time for deep-sky observation with the entire moonlight glaring out most of the faint celestial objects.

On this day, the moon will not be visible as it will be situated on the same side of the Earth as the Sun. With no moonlight glaring much of the night sky, this is the best time to observe the deep sky objects throughout the night. It is predicted that this lunar phase will occur on this day. The month transition from Muharram 1442to Safar 1442  shall take place a day later (September 18) in accordance with the Hijri Calendar 1442.

Neptune will be in opposition at night on September 12 and will be at its close approach to Earth. This means that the blue gas giant will appear at its brightest and largest than ever before. Neptune will be situated directly opposite the Sun in the sky, which would give it further illumination. However, since the planet is far from Earth, it will not be easily seen through the naked eye. Avid skywatchers may need to get some extra help from a powerful telescope for this one.

When viewed through an 8-inch or higher kind, it would look like a faint bluish star-like dot. Long exposure photography is very much needed to reveal its detail and moons. The planet will be visible all night round, beginning at 7 PM after the twilight fades until sunrise of the following day, September 13.

Starting from the late evening hours of September 5, the Waning Gibbous Moon and the red planet Mars would appear close (conjunction) to each other at the sky when viewed from Earth. These celestial objects will be observed at the eastern portion of the sky in the constellation Pisces (The Fishes) at around 9 PM, until sunrise of the next day (September 6). Mars would look like a “reddish star” that doesn’t twinkle. 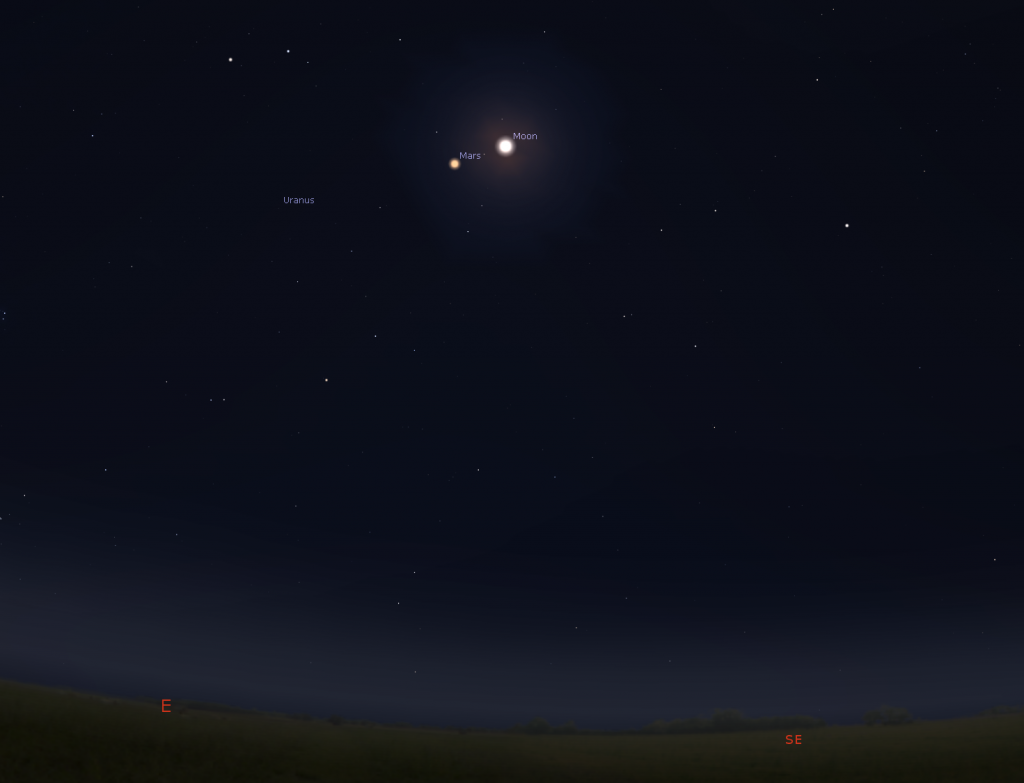 Illustration of the Moon-Mars Conjunction on September 5, 2020 (not to scale) (Image Credit: Stellarium)

On September 14, it’s Venus’ turn to get close with the Waning Crescent Moon in conjunction, to appear relatively close to each other in the sky before dawn.  The conjunction pair is expected to be observed from 3 AM until sunrise, situated in the constellation of Cancer (The Crab).

Illustration of the Moon-Venus Conjunction and Mars on September 14, 2020 (not to scale) (Image Credit: Stellarium)

On September 25, The Waxing Gibbous Moon and gas giants Jupiter and Saturn would appear close to each other, creating a “celestial triangle” in the sky, as seen from Earth. The appulse pair will be observed in the constellation of Sagittarius (The Archer) as the dusk fades at around 6:15 PM from the south-southeastern horizon until it sets at the southwestern horizon at around 12:30 AM of the next day (September 26).

Illustration of the Moon-Jupiter-Saturn Appulse on September 25, 2020 (not to scale) (Image Credit: Stellarium)