Winter is about to get going! Better prepare that warm-up attire and relax with a bonfire for the cooler nights and foggy mornings ahead. Wondering what’s going to be up in the sky for the new month? The following is a list of astronomical events for November 2017. All dates and times were given in UAE Local Time.

Situated on the opposite side of the Earth as the Sun, the moon will be fully illuminated (100%) on this day. For selenophiles (people who love the moon), this is the best time to observe all the surface features of this celestial object, including the craters and maria. It will start appearing at around 6:15 PM (at the eastern horizon) as it rises, and can be seen throughout the night until sunrise positioned in the constellation of Aries (the ram). Because of its full illumination during this phase, it will not be a good time for deep-sky observation with the entire moonlight glaring out most of the faint celestial objects.

The peaks of long-running minor meteor shower known as the Taurids will take place. It is projected to bring up to 5-10 meteors per hour under completely dark, moonless, and cloudless skies. Though little in quantity, it is known for cascading bright meteors known as “fireballs” or bolides. These meteors will seem to radiate from the constellation Taurus (the bull) but can be observed anywhere in the sky from around past 8 PM all the way through the dawn of the next day. The space debris from Comet 2P known as Encke entering Earth are the ones responsible for this meteor shower. A must have in observing this astronomical phenomenon is patience; lots of them and of course, comfort.

There are actually two separate peak dates for this meteor shower. The first stream of the Taurids will happen on the night of November 4 until the dawn of November 5. A bright full moon will glare out much of the faint objects during this period, making it difficult to appreciate this sky event and would behold fewer meteors. On the other hand, the second stream will take place on the evening of November 10 up to sunrise of November 11. This time, the last quarter moon will ascend much later after the radiant, providing less moonlight to interfere with the meteor shower.

The position of Taurids radiant (Graphic Courtesy of Stellarium)

The Moon and the red planet Mars would appear close to each other (around 3° angular separation) in the sky when viewed from Earth. This close approach will be visible in the southwestern portion of the sky in the constellation of Virgo (the virgin) from around 3:45 AM until sunrise.  The moon will be at the Waning Crescent phase (about 10.5% illuminated). Mars would look like a faint reddish dot in the sky positioned to the right of the Moon. 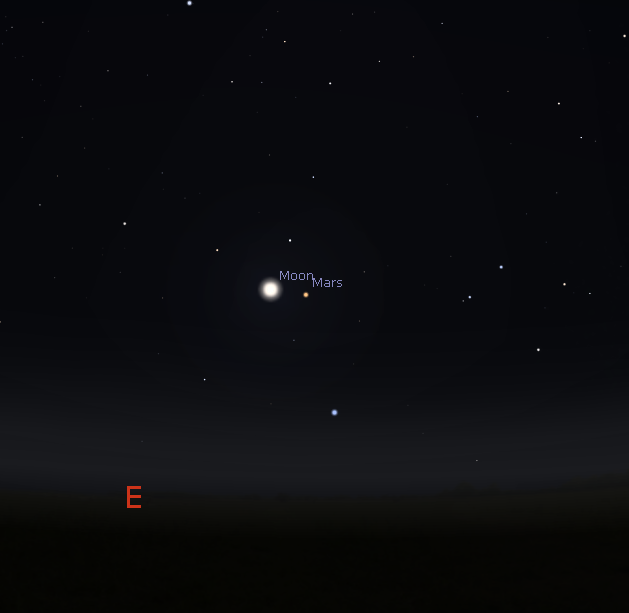 Illustration of the Close Approach of the Waning Crescent Moon and Mars on November 15, 2017 (not to scale) (Graphic Courtesy of Stellarium)

On the late evening hours of November 17 until the dawn of November 18, 2017, the peak of the average meteor shower known as the Leonids will take place. It is projected to bring up to 15 meteors per hour under completely dark, moonless and cloudless skies. These meteors will seem to radiate from the constellation Leo (the lion) at the sky’s eastern portion but can be observed anywhere in the sky from around midnight all the way through dawn. The space debris from Comet 55P known as Tempel-Tuttle entering Earth are the ones responsible for this meteor shower. Being in its new moon phase, there will be no moonlight to interfere the spectacular appearance of these meteors in the night sky. A must have in observing this astronomical phenomenon is patience; lots of them and of course, comfort. 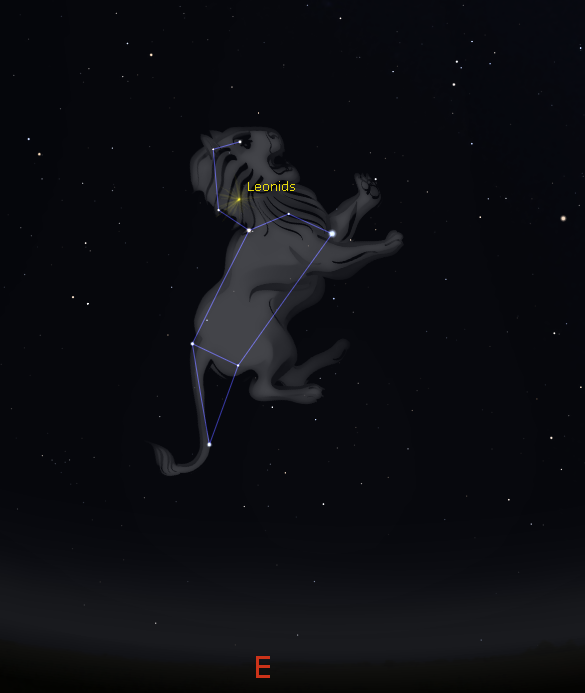 The position of Leonids radiant (Graphic Courtesy of Stellarium)

On this day, the moon will not be visible as it will be situated on the same side of the Earth as the Sun, in the constellation of Libra (the scales). With no moonlight glaring much of the night sky, this is the best time to observe the deep sky objects throughout the night. It is predicted that the lunar phase will occur on this day. However, the month transition from Safar to Rabi al-Awwal shall take place two days later (November 20) in accordance to the Hijri Calendar 1439.

The smallest planet in the Solar System, Mercury will appear at its highest point just a few moments after sunset.  The maximum extent of angular separation from the Sun as seen from Earth will be at around 11° (in the UAE). This means Mercury can be only seen up to 11° above the southwestern horizon, from 5:50 PM, before disappearing from view at 6:30 PM as it sets. Though it is moderately bright (at the apparent magnitude of -0.4), observing it will be challenging due to twilight glare from the fact that Mercury is situated near the Sun in the sky.

Illustration of Mercury at Greatest Eastern Elongation (about 11° above the eastern horizon) just after sunset on November 24, 2017 (not to scale) (Graphic Courtesy of Stellarium)

In the UAE and other regions in the Northern Hemisphere, November is considered the apparent starting month of the winter season. Many brilliant prominent winter constellations and deep-sky objects will be seen during night time and early morning hours such as the Great Orion Nebula, Andromeda Galaxy, and the brilliant open star cluster Pleiades known as the “Seven Sisters” in Taurus. Planet Mars will show up as well at around 4:30 AM while the bright “morning star” planet Venus few minutes before sunrise. For this month, sunrise occurrences range between 6:29 AM and as late as 6:48 AM while sunsets shall happen between 5:42 PM to as early as 5:33 PM. 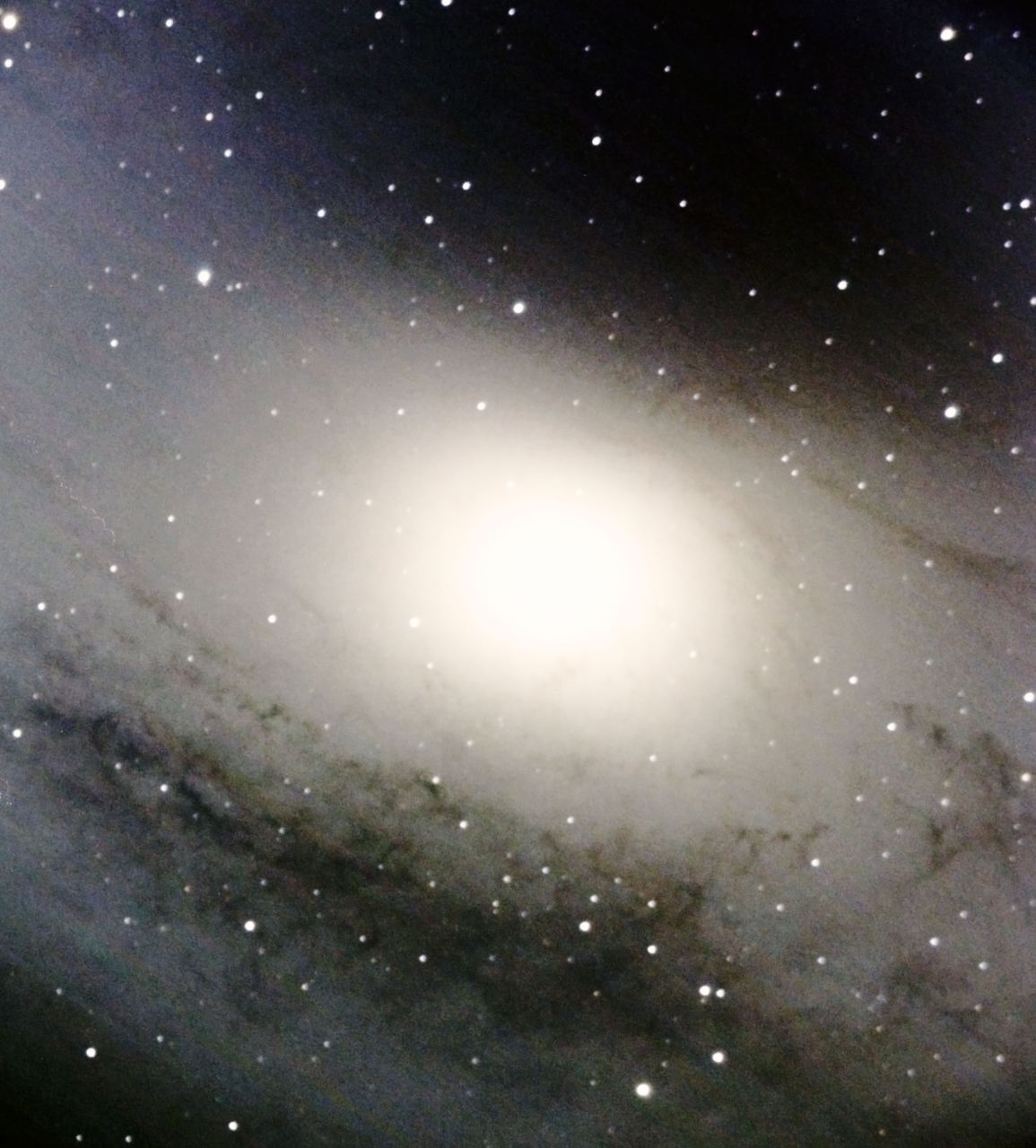 Have a pleasant November, everyone. Clear skies!