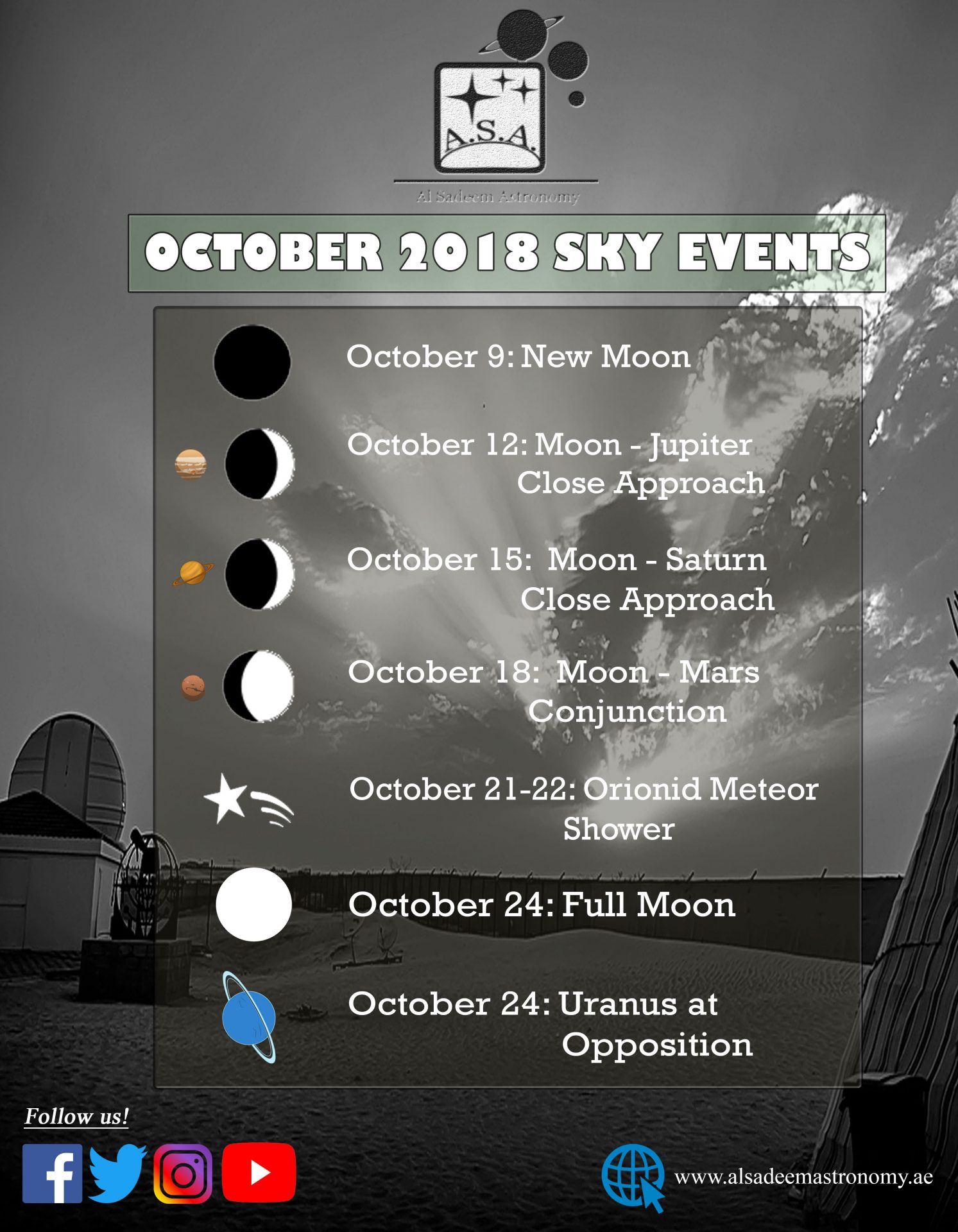 Summer of 2018 is officially over. Though it remains generally hot during the day, weather conditions across the UAE in night time is starting to gradually cool down. Wondering what’s going to be up in the sky for the coming month? The following is a list of astronomical events for October 2018. All dates and times were given in UAE Local Time.

On this day, the moon will not be visible as it will be situated at the same side of the Earth as the Sun, in the constellation of Virgo (the virgin). With no moonlight glaring much of the night sky, this is the best time to observe the deep sky objects throughout the night. It is predicted that this lunar phase will occur on this day. However, the month transition from Muharram to Safar 1440 shall take place three days later (October 12) in accordance to the Hijri Calendar.

The bright Waxing Crescent Moon and the largest planet Jupiter will appear close to each other in the sky throughout the night of this day. It will be seen right after sunset (around 6:15 PM) until 7:30 PM when Jupiter will set earlier. These celestial objects will be situated in the faint constellation Libra (the scales). The Waxing Crescent Moon will be about 4° northwest of Jupiter. Jupiter would look like a bright white “star”.

Moon-Jupiter Close Approach on October 12, 2018 after sunset at around 6:30 PM (not to scale) (Graphic Courtesy of Stellarium)

Moon-Saturn Close Approach on October 15, 2018 at around 7 PM (not to scale) (Graphic Courtesy of Stellarium)

The red planet Mars and the bright Waxing Gibbous Moon will appear close to each other in the sky. The two will be separated 1°54’ from each other in the night sky. The close approach will be visible at the east-southeastern horizon right after (around 6:15 PM) until around 12:45 AM of the following day (October 19) when the Moon and Mars will set at that time. Both celestial objects will be situated in the constellation Capricornus (the goat). Mars would look like bright reddish “star” south of the Moon. Also visible to the far southeast of the two celestial objects is Saturn.

Moon-Mars Conjunction on October 18, 2018 at around 7 PM (not to scale) (Graphic Courtesy of Stellarium)

On the late evening hours of October 21 until dawn of October 22, 2018, the peak of an average meteor shower known as the Orionids will take place. It is projected to bring up 10-20 meteors per hour under completely dark, moonless, and cloudless skies. These meteors will seem to radiate from the constellation Orion (the hunter) but can be observed anywhere in the sky from 11 PM all the way through dawn. The space debris from the prominent Halley’s Comet entering Earth is the one responsible for this meteor shower. With the moon being in its waxing gibbous phase (about 90% illuminated), it is expected that we would see less than projected number of meteors for most of the night because of some moonlight interfering much of the sky, though around 4 AM until sunrise, this is the window period when we could observe the normal meteor count rate. A must have in observing this astronomical phenomenon is lots of patience and comfort. 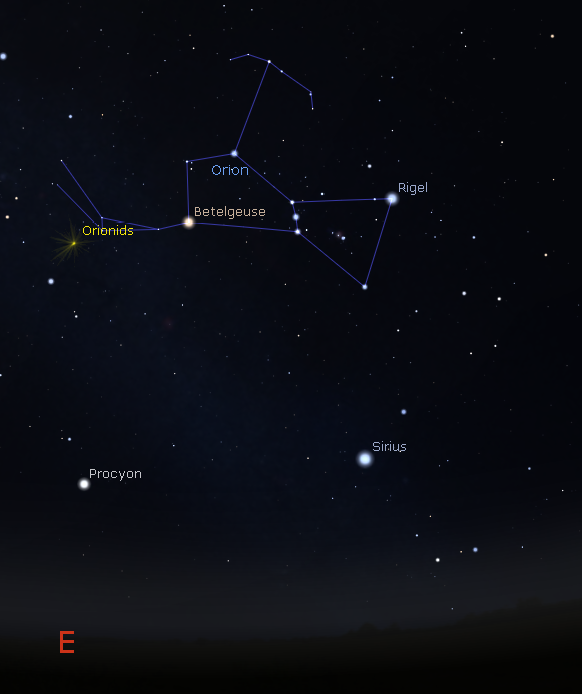 The position of Orionids radiant (Graphic Courtesy of Stellarium)

Situated on the opposite side of the Earth as the Sun, the moon will be fully illuminated (100%) on this day. For selenophiles (individuals who love the moon), this is the best time to observe all the surface features of this celestial object, including the craters and maria (dark patches). It will start appearing at around 6:50 PM at it rises from the east, and can be seen throughout the night until sunrise; positioned in the constellation of Pisces (the fishes). Because of its full illumination during this phase, it will not be a good time for deep-sky observation with the entire moonlight glaring out most of the faint celestial objects. 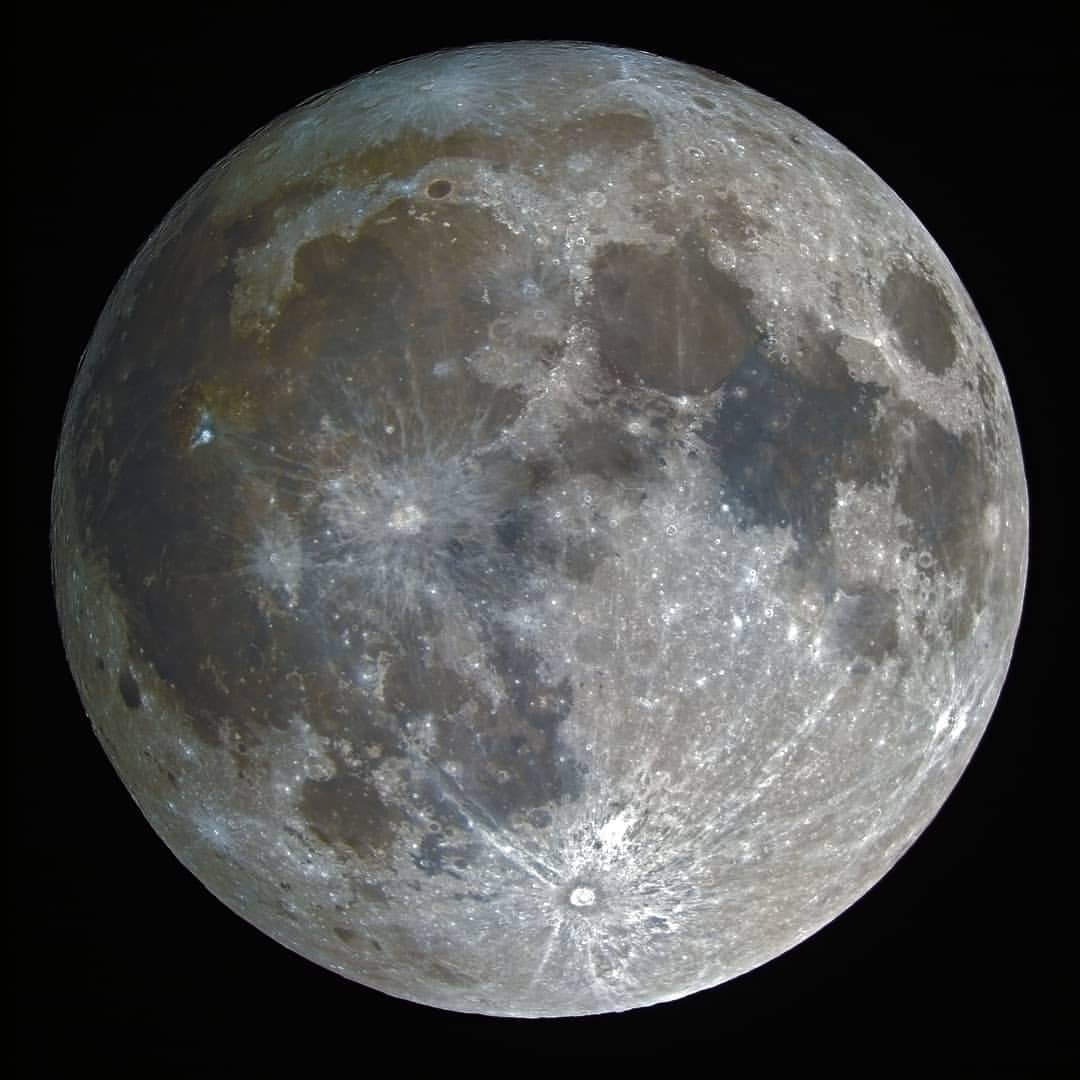 By night time of this day, Uranus will be in opposition. This simply means that the blue gas giant will appear at its brightest. Neptune will be situated directly opposite of the Sun in the sky (in the constellation of Aquarius), which would give it further illumination. However, it cannot be easily seen through naked eye and will need some astronomical equipment. When viewed through powerful telescopes, it would look like a slightly faint bluish star like dot. Long exposure photography is much needed to reveal its gaseous detail and moons. The planet will be visible all night round; starting at around 7:15 PM, few moments after twilight; when it is high enough for good planetary observation (about 20° above the eastern horizon), reaches its highest point around 77° above the southern horizon at 12 AM of October 25, 2018, until it completely sets at 6 AM of the same day. The bright Full Moon will interfere much of the dark sky but the planet will still be observable.

In the UAE, October is considered as the transition period from summer to winter. Most solar system planets are starting to show up earlier at night. Saturn will be visible right after sunset until about 9 PM and 10:30 PM respectively, while Mars until 1:15 AM. Uranus and Neptune could be seen using a large telescope from 7 PM onwards until sunrise. Mercury will not be visible in the sky this month because it is placed near the Sun in the sky. Planets Venus and Jupiter could not be well-observed due to low elevation in the sky.

Under clear, moonless, and extremely dark skies, several deep-skies objects such as nebulae, star clusters, and galaxies can be seen through binoculars, cameras with wide-angle or zoom lens and more preferably, telescopes. The Milky Way and its huge cluster of deep-sky objects will set much earlier in the night (until 9 PM). Some known autumn deep-sky objects such as the Andromeda Galaxy, and Pleiades, and Orion Nebula will start appearing later at night starting from 9 PM onwards until sunrise.

Have a wonderful and blessed October, everyone! Clear skies!