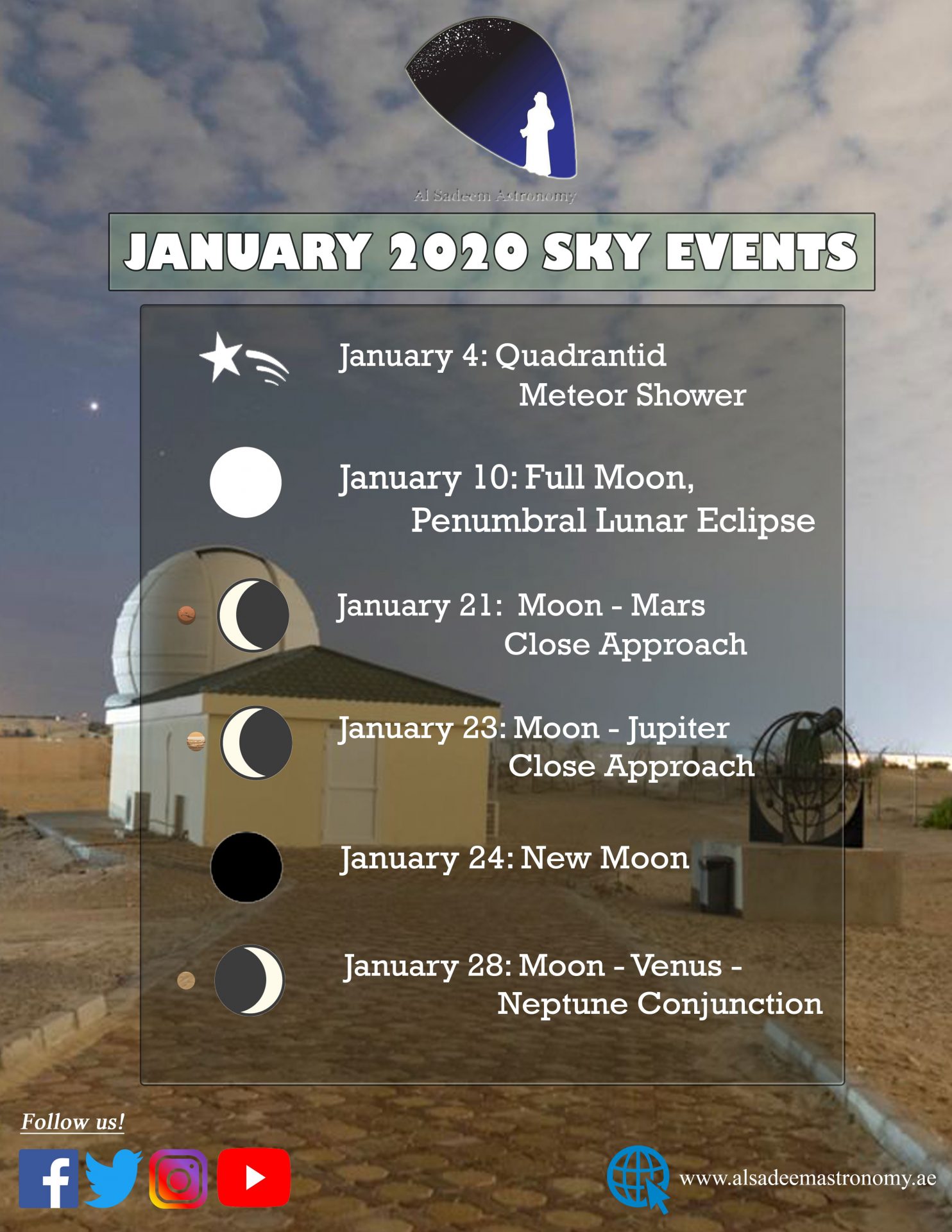 It’s the first day of the new decade! What better way to begin the New Year than observing the night sky?

January may not be that “busy,” but it sure has some exciting treats to look forward to—meteor shower displays, some asteroids that are well placed for observation, and a quick showcasing of some of your favorite planets in the evening.

So don’t forget to bundle up when you go out for your quick dose of stargazing because January in the United Arab Emirates (UAE) is the coldest month of the winter season!

Another quick reminder: the UAE will continue to have shorter days and longer nights: Sunrises are expected at 7 A.M., while sunsets are anticipated as early as 5:45 P.M.

January’s opening salvo is the Quadrantids, an above average shower with up to 40 meteors per hour—almost as competitive as crowd favorites the Perseids in August and December Geminids.

It can already be observed as early as the first day of the month, but it’s best to see it at its peak, particularly at midnight of January 3 until the morning of January 4 when the first quarter Moon sets at 11:46 P.M. here in the UAE.

The Quadrantids, which is believed to have come from an extinct comet known as 2003 EH1, will appear to radiate from the Bootes constellation, but can be pretty much seen anywhere in this night’s fairly dark skies.

The full Moon on January 10 will be a bit special because of a penumbral lunar eclipse.

A penumbral lunar eclipse happens when the Moon passes through the Earth’s partial shadow, or penumbra. Expect the Moon to darken just a bit, and will not turn blood red in color.

For the phases of the Moon, below are the dates to keep in mind:

Here’s a treat for serious astronomy enthusiasts and professional astronomers in January: two asteroids are going to be well placed in the sky for observation. These are Asteroid 511 Davida and Asteroid 5 Astraea.

Astronomy website In the Sky further tells us more about these objects in the asteroid belt. Regardless of their location on the Earth, 5 Astraea (to be found in the Cancer constellation) and 511 Davida (lying in Gemini constellation) will both reach their highest points in the sky around midnight local time.

Discovered in 1903, 511 Davida is one of the ten most-massive asteroids, and the 7th-largest one. Meanwhile, 5 Astraea is an S-type asteroid or the ones that have a siliceous or stony mineralogical composition, making them shine brighter than the other asteroids in the belt.

On January 21, the dawn sky will be embellished by the Moon-Mars conjunction. Expect to see the pair at the southeastern horizon of the sky beginning at three in the morning.

Following this is the close approach—or the appulse—of Moon and Jupiter on January 23. It will be tough to spot in the night sky though. The pair, which will be at the south-eastern section of the sky, won’t be higher than 11 degrees above the horizon.

Finally, on January 28, the Moon, Venus, and Neptune will all make their closest approach. Look up at the southwestern part of the sky, beginning at six in the evening as dusk fades.

Planet Venus will be a bright evening planet for January, and will be usually mistaken as a gleaming star in the night sky. One cannot miss its lustrous show. Just remember this: if it doesn’t twinkle, it’s a planet.

More distant planets Uranus and Neptune will also be well-positioned in the evening sky for most of January, but a guided observation—either with a powerful telescope or binoculars—is needed to see them.

The rest of the planets will show up in the morning, like the gas giant Jupiter, and early in the evening, like Mercury, but will set an hour or so after the sun goes down. Red planet Mars will be difficult to hunt down as it is a very low object for January, and will be sitting in southern Ophiuchus.