By next week, on the evening of August 7, 2017, a partial lunar eclipse will bring a stunning viewing experience for all astronomy enthusiasts, especially the selenophiles, as well as both amateur and professional astronomers for this year.

This rare lunar phenomenon will be visible across most areas in Africa, Asia (including the Middle East), Europe, Australia, and Antarctica.

This celestial event will undergo two phases. First is the penumbral phase which will begin at 7:50PM and ends at 12:50AM, August 8, 2017 (UAE time), wherein the Earth’s penumbra (outer shadow) will start covering the Moon. The Moon will look dimmer than normal on its entirely. Lastly, there is the partial phase happening from 9:22PM until 11:18PM, wherein the Earth’s umbra (inner shadow) will cover the Moon’s southern portion. On the event of its maximum extent at 10:20PM, an apparent “bite” on the Moon with a little reddish hue will be seen as the Earth’s darker shadow will cover a portion of the Moon’s fully illuminated disk.The entire duration of this celestial event will be approximately 5 hours long, with the partial phase lasting for 1 hour and 55 minutes. 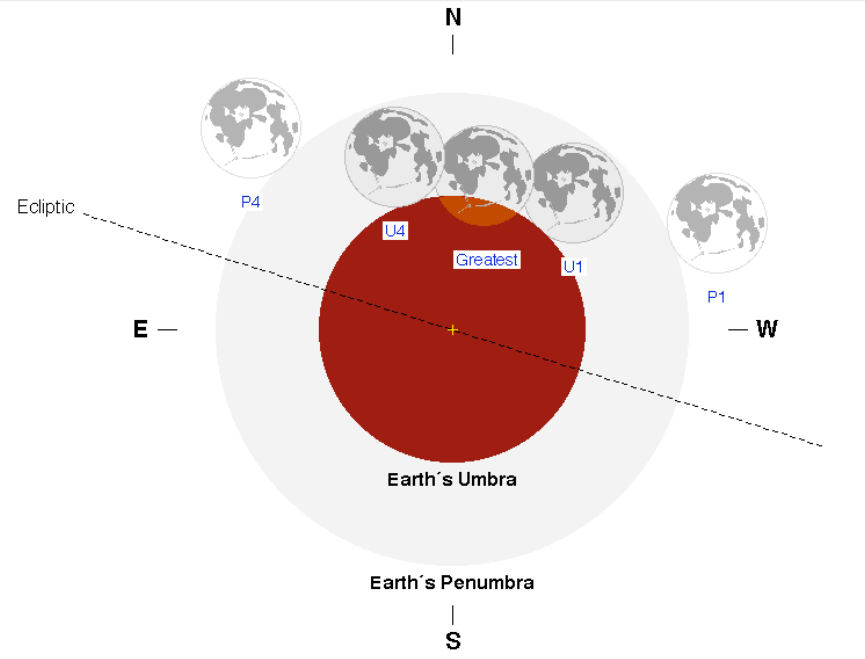 In general, a lunar eclipse takes place when the Sun, Earth, and Moon are aligned in a straight line along the ecliptic plane, wherein the Earth blocks traces of sunlight; casting its shadow on the Moon.In this case, it is only partial because the Sun-Earth-Moon alignment is not perfectly straight, resulting just a portion of the Moon covered by the Earth’s shadow.

Figure 4. Notice the Sun-Earth-Moon system is not perfectly aligned in a straight line resulting to a partial lunar eclipse (not to scale) (Image Credit: timeanddate.com)

Lunar eclipses only happen during the Full Moon phase in which it resembles the same Sun-Earth-Moon alignment. But why do not experience a lunar eclipse every Full Moon? The Moon’s orbital plane is slightly titled (about 5 degrees) above the equatorial plane in which it does not make any linear alignments with respect to the Earth and moon. On its occasion, especially during Total Lunar Eclipse, the Moon turns reddish in color due to the light rays from the Sun being bent in different angles by the Earth’s atmosphere, with the red color being more prominent before scattering towards the lunar surface.

Figure 5. The tilt of the Moon’s orbital plane with respect to Earth’s plane (not to scale) (Image Credit: angelfire.com)

Compared to a solar eclipse, it is much safer and no expensive equipment is really needed for viewing at the eclipse. You can just look directly at the moon and witness its beauty. But if you want more satisfying, you can use your telescope, binoculars and digital cameras with preferably long lenses.

Feel free to share your wonderful viewing moments of this celestial event together with your own captures in our social media sites using the #alsadeemastronomy, #abudhabiastronomy, and #PartialLunarEclipse2017. Have a nice stellar day ahead! Clear skies!

Partial Lunar Eclipse on 7/8 August 2017 – Where and When to See. (n.d.). Retrieved from timeanddate.com: https://www.timeanddate.com/eclipse/lunar/2017-august-7

Book A Visit
PrevPreviousWHAT’S UP IN THE SKY THIS AUGUST 2017?
NextSUNSPOT MONITORING – JULY 31, 2017Next