Heads up, fellow stargazers! April showers us with an acceptable display of the Lyrids, along with a parade of planets in the early morning sky.

Observing planets and deep-sky objects on clear, dark nights will be more effective using a telescope or binoculars—like the smart telescope Stellina, an easy-to-use observation station that can be operated using smartphones and tablets. Al Sadeem Astronomy is the only distributor of this smart telescope here in the Middle East. You can place an order or inquiry here.

Check out the sky events for April 2022 in the United Arab Emirates (UAE), to help you plan your stargazing experience this month. All dates and times are in UAE Local Time (UTC+4). 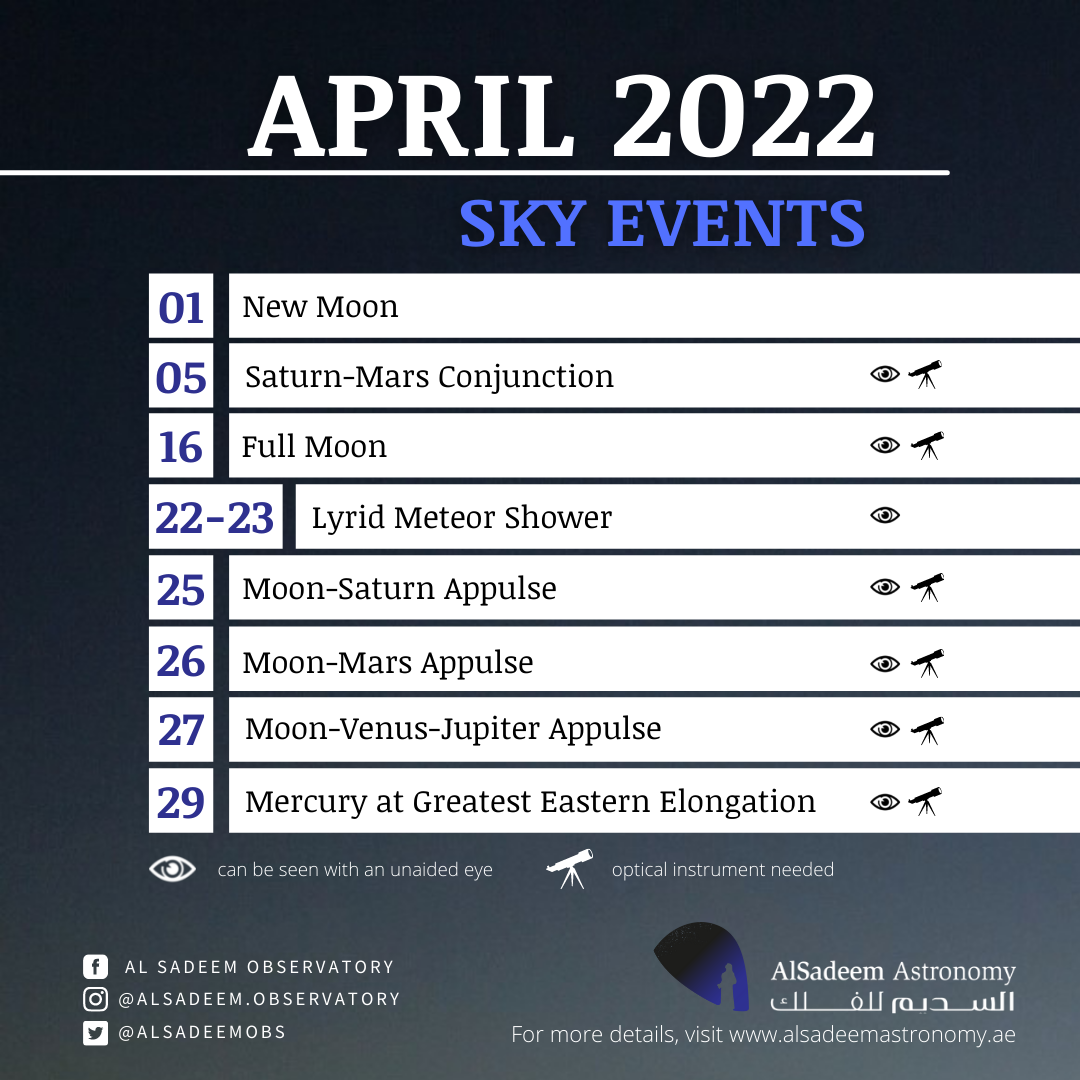 April 5: Conjunction of Saturn and Mars

Conjunctions and appulses are aplenty this month, and planets Saturn and Mars begins this series of spectacles on April 5. The pair will be extremely close enough to each other in the sky that they can even fit within the field of view of a small-sized telescope!

Saturn passes at 0.3° to the northwest of Mars, both rising at 03:30 in the morning, and reaching their peak altitude of 25° above the south-eastern horizon before fading from view as dawn breaks around 05:35 A.M.

The Lyrid meteor shower is actually active during the latter part of April—that’s from April 16 to April 25—and it’s peaking on the late evening of April 22 until dawn of April 23.

This average shower is likely to bring its best displays around 04:00 A.M., when its radiant point is highest in the sky. About two hours later, the Last Quarter Moon takes over the sky at 05:48 in the morning,

At its peak, the shower is expected to produce a nominal rate of around 18 meteors per hour, under a perfectly dark and clear sky—and that the radiant of the shower is situated directly overhead.

To see the most meteors, the best place to look is not directly at the radiant itself, but at any dark patch of sky which is around 30–40° away from it.

April 25: Appulse of Moon and Saturn

As April comes to a close, the Moon will share the night sky with a number of planets. It begins on April 25, when the Moon pairs up with Saturn in the early morning sky at 02:45 A.M. The pair will be up in the sky as the Sun breaks from the horizon around 05:30 A.M.

April 26: Appulse of Moon and Mars

On April 26, it is Mars’ turn to dance with the Waning Crescent Moon, rising at 03:30 will reach its peak altitude of 31° above the south-eastern horizon before fading from view as dawn breaks around 05:30.

A Waning Crescent Moon and two bright planets illuminate the early morning sky on April 27. Venus will be in conjunction with the Moon, with the gas giant Jupiter glistening about 6.7° west of the Moon.

Catch the trio at 04:00 in the morning above the eastern horizon.

Can an inner planet and an open star cluster pair up and give you a mesmerizing treat of a lifetime? April says you can.

On April 29, Mercury reaches its greatest eastern elongation, shining brightly at mag +0.2 above the west-northwest horizon at sunset, around 7 P.M. until 8 P.M. And it will be about 1.5° near the Pleiades, or Al Thurayya. They’re so close with each other, Mercury and Pleiades can be both seen within the same field of view of binoculars or a small telescope.

A tip for budding astronomy enthusiasts: when Mercury is in the east, it means that it’s visible in the early evening twilight. When it’s found in the west, it can be seen shortly before sunrise.