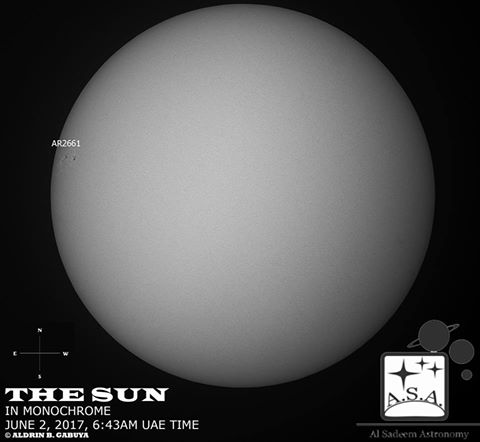 The sky was clear; while transparency and seeing are excellent at the time these images were taken.

Active Region (AR) 2661, situated near the Sun’s eastern limb which had further moved into our view, remains vigorous as more sunspots were seen and emitted several C-class flares in the past 24 hours. The latest sunspot number (as per our visual count and Wolf number calculation) is 18.

According to Spaceweather and SIDC reports, there might be more occurrences of C-class (or possibly M-class) solar flare activity could be associated with this AR in the next couple of days (not Earth-directed); being closely monitored for any significant development.

Some plages, flare activity, granulation and a prominence were captured, as shown in the false-color H-alpha image.

Overall, despite of the slight increase, solar activity was found to be low at this moment.