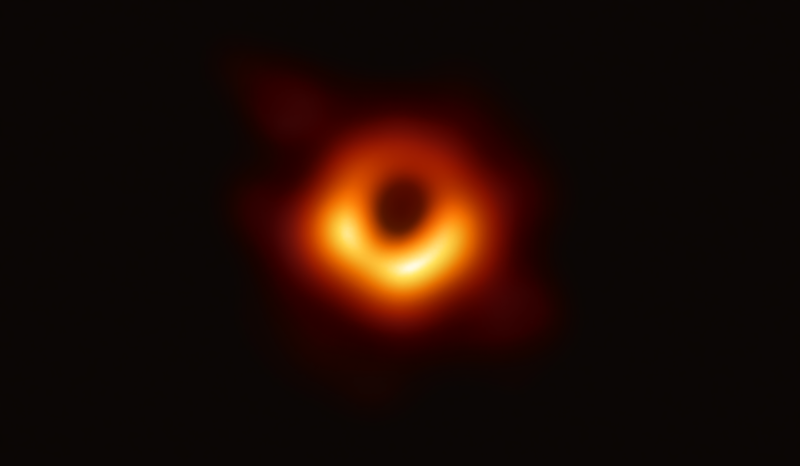 On Wednesday, a major breakthrough in the field of astrophysics thrilled humankind when a team of scientists unveiled the first-ever photo of a super massive black hole.

It is found in the giant elliptical galaxy Messier 87 (M87), which is located 54 million light years from Earth. According to NASA, M87 “is the home of several trillion stars and a family of roughly 15,000 globular star clusters.” To get a clearer picture of its immensity, compare it with the figures of our Milky Way galaxy with a few hundred billion stars and about 150 globular clusters.

Al Sadeem Astronomy Observatory has an image of M87, too! See below.

For so many years, scientists and experts did their best to capture the essence of a cosmic object as complex as a black hole. We have been provided with artist renditions, simulations, and interpretations but we never really had a solid proof of its existence.

But we’ve learned that black holes are areas in space where gravitational pull is so strong that not even light can escape it. We have also been introduced to several theories surrounding black holes, and this first photo takes us one step closer to uncovering its mysteries.

Thanks to the team behind the Event Horizon Telescope project, a global collaboration of more than 200 scientists from all parts of the globe. A total of eight huge radio telescopes in six locations—Chile, Mexico, Spain, two states in the USA (Arizona and Hawaii), and the South Pole—were employed simultaneously to collect more than a petabyte of data about M87’s black hole in April 2017.

It took the team led by Director Shep Doeleman two years to process the historic image. And their hard work finally paid off.

But what really happens if you go near or even fall into a black hole, assuming it’s totally possible? There has been a lot of speculation about it and JoAnna Klein and Dennis Overbye laid them down best in their New York Times article.

To begin with, the edge of a black hole—or its event horizon—is the point of no return. “At the event horizon, light is drawn in to a black hole, never to escape. And nothing is faster than light,” Klein and Overbye explained.

Second, it’s not clear how exactly you’ll going to die once you get sucked in a black hole. It’s either you get “spaghetti-fied” because of the strong force of gravity and be crammed into the black hole’s infinitely dense core called singularity (according to Albert Einstein’s general theory of relativity of 1915), or be burned into smithereens by the event horizon’s blazing firewall of energy (as proposed by a group of theorists including Donald Marolf, Ahmed Almheiri, James Sully and Joseph Polchinski in March 2012).

Whatever the case, all circumstances are as hypothetical as the “what ifs” posited regarding black holes. But that’s what makes these space objects more interesting. They push humankind to crave for more answers.

To close, here’s beautiful quote from the late Stephen Hawking, when he delivered a speech in Chile to discuss about black holes: “[They] are not the eternal prisons they were once thought,” he said. “Things can get out of a black hole, both to the outside, and possibly, to another universe. So, if you feel you are in a black hole, don’t give up. There’s a way out.”